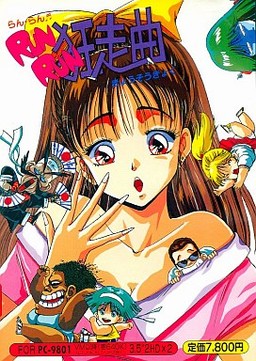 The female inhabitants of a poor village in Japan want to improve the technological level of their homeland. A lazy but patriotic young man who grew up in the same village agrees to organize a world-wide running competition that will hopefully bring glory to the village.
Run Run Kyōsōkyoku is an arcade-style on-foot racing game. It uses a split-screen side-scrolling view and can be player against computer-controlled opponents or in a two-player mode. The latter allows players to choose any stage, while the former follows a linear set of levels, starting in Tokyo and advancing to the USA via China and Europe. The courses typically feature platforming sections alongside flat terrain; it is usually required to jump in a timed fashion to succeed, and jumps can vary in height and length depending on how long the player holds the correspondent key. Runners would also take falling damage in certain spots.
Players have ten female runners at their disposal. Each has her own attributes in four categories: jumping, speed, vitality, and stamina. The vitality parameter affects the time needed for the runner to recover after falling down; stamina influences the steadiness of the speed throughout the whole course. Each stage consists of the three races. If the player loses one but wins the other two, a mildly explicit erotic picture of a generic girl corresponding to the stage’s country is shown. Should the player win the first two races two more explicit images are shown.​